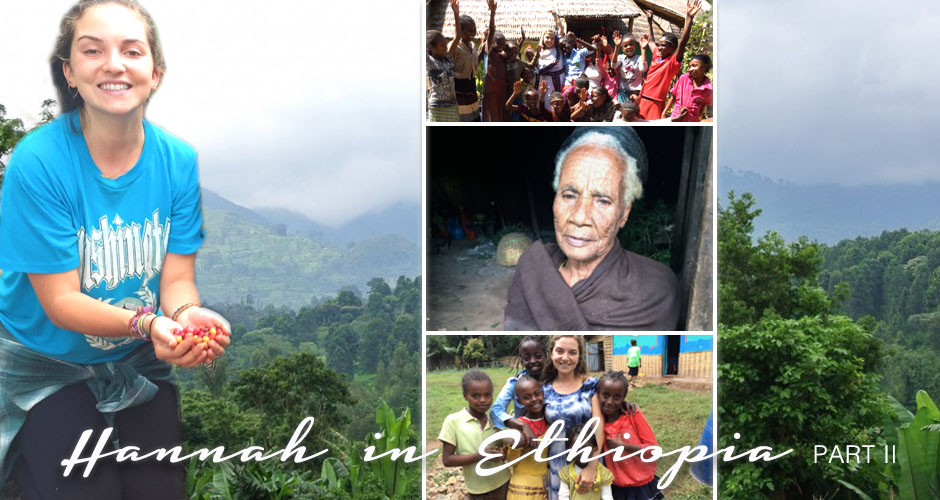 In July, I shared with you the story of my “niece,” Hannah, who is spending six months as a volunteer in a rural village in Ethiopia. Now four months into her amazing journey, Hannah is continuing to share her experiences via her blog, Hannah in Ethiopia. I am so proud of and inspired by Hannah, and her recent account of the elderly in her village is so moving that I had to share it.

THE HIDDEN AMOUNG US

As my departure date approaches at an ever-increasing speed, I have also begun a new phase of my work here. While I am still teaching English at the school, I have also started doing what we might call “senior outreach.” Growing old here is truly a remarkable thing—you are considered lucky if you make it past 50, and that number is decreasing as living conditions worsen. So for those who have somehow made it to 80 or even 90 years old, well, they are far and few between. Because of their rarity, you would think that the community would treasure them and show them the respect they deserve, and then some. But here in the Sidamo region of Ethiopia, they are seen as worse than nothing. In fact, to even say that they are seen is a stretch. They are too traditional, too outdated, and a waste of resources. If one is lucky enough to have family nearby who care enough to help take care of them, then they might be okay, but most are sitting alone in their dilapidated huts, day in day out, starving and freezing up until their unacknowledged deaths. To call it tragic and inhumane is completely inadequate.

Because of all this, I have decided to take one eye off my kids and turn it toward the elderly. With my extraordinarily vague mission being “to help,” there isn’t exactly a clear path or set of requirements. But this allows me a great deal of flexibility. I visit, I ask, and I help however I can. Usually this means that I return from the visit and talk over everything with Tsegaye, the local co-founder and my main man here, and we discuss our options. If they need food, we get them a hot meal at least once a week. If they need firewood, we try to set up a weekly delivery.

I’ve started the program out small, focusing on a handful of at-risk elders with whom Common River is already familiar. Two of them are these beautiful little old ladies who each have a small home on a shared piece of land. One of them, Ille, was living in horrifying conditions. Her roof was completely porous, which meant that whenever it rained, the water leaked through every inch of her home. This is especially problematic here, where it often rains at least once a day, especially during the rainy season. When it happened, she had to hold a leaf over her head for shelter. And her blanket never had enough time to dry before the next storm, so she used those leaves as a replacement while she slept as well. She was crying and almost hysterical as she explained this to us, showing us her stack of leaves in the corner, ready at a moment’s notice. So we promised to fix her roof, and we did. Common River is a very small organization, so funding is very limited and at first it seemed like repairing her roof was beyond our means. But I suggested that we buy a durable tarp to cover her roof instead, and that is what we did. So far so good! Both she and Didayu (the other woman) had a laundry list of physical pains and ailments as well, so Worke (my interpreter) and I took them to the health center, along with the mother of one of our boys who lives here with us. Without the financial support, none of them would ever be able to afford a visit to the clinic. What was truly amazing though, was that even though they had 15 prescriptions altogether, the medicine only cost around $12.

Despite outings such as these, I still find myself most affected by their stories. I’d like to share Didayu’s. Didayu is the rightful owner of the land that she and Ille live on. It was left to her when her husband died. She has no children, so when her husband passed away, her relatives asked her to pass the land on to one of them, so they could help her take care of it. But her husband had a second wife who did have a son, so Didayu decided to offer the land to him. This was in line with the Sidamo culture and traditions, and was in fact the more respectful choice, but her relatives still took it as an insult. As a result, they told her she had clearly made her choice, and they were no longer her family. So they stopped visiting her, and offered her absolutely no support. Then several years ago, her cow yanked her to the ground and she broke her hip, leaving her completely unable to walk. Those same relatives came back, took her cow, sold it, and didn’t give her a single cent. And on top of that, the son she had left the land to was giving her nothing, which is still the case today. Their agreement was that he would take care of the crops and they would split the profits, but instead he has kept it all for himself. His family brings her and Ille one “meal” a day, but this is typically a piece of bread, or nothing at all. And that is the full extent of their food for the day. So now she truly has nothing—no food, no money, no family. All she does is sit on a stool in her doorway all day long, waiting for the time to pass. Whenever I see her, she just holds me and kisses me; it is likely the highlight of her week. Her story is hardly unique. The complete lack of respect for human life is astonishing, and enough to make you never want to grow old. At least not here.

I’ve been here four months now, which seems to be just enough time to start seeing some of the true horrors that the community tries so hard to keep hidden. The other day, one of my students was visibly upset, and when I asked why, she and all her friends explained that she had lost her shoe. She would start silently crying in class whenever she thought about it, and everyone else found it to be an appropriate response. I was confused, but then they mimed to me that her dad was going to hit her when he found out. She was so terrified, and she knew it was coming. This is because domestic abuse is so utterly normal. This girl lost her shoe (which, by the way, was completely filthy and broken anyway), so her dad was going to abuse her for it. Some of the girls were even laughing as they acted it out, because it happens to all of them and they don’t see anything odd about it. I almost started sobbing right there in the middle of our English class. I’ve never felt more helpless than I did at that very moment. I had everyone go outside to search for the shoe, which was basically pointless in our jungle of a compound. So we ended up brainstorming ways for her to get past her dad before he could see that the shoe was missing. When I saw her the next day, I almost collapsed with relief when she told me that she was untouched. Apparently she hid the other shoe in her bag, ran past her dad shouting that she had to go to the bathroom, and then threw the shoe out into the trees, so it was like the pair never existed to begin with. Smart girl.

A few days later, however, I encountered an even darker reality. There is a family here that is made up of some of my favorite people in the whole world. Almaz*, the woman I am closest with here, is the grandmother of this family (and a very real grandmother to me as well). One of her daughters is deaf and unfailingly kind, and is the mother of Genet*, who lives with Almaz. Almaz’s other daughter is the mother of my two favorite students. Those three granddaughters together are the people I’ve formed the strongest bonds with. I love them with every piece of myself, and have absolutely no idea what I am going to do without them.

The other day, I found out that those two sisters have a half brother, who is 17 and goes to school a few hours away. Apparently, whenever he is here, he is extremely violent and has abused both Almaz and Genet. He has threatened to kill both of them, with a particular focus on Genet. Almaz had taken care of him as a child, but he is very troubled, and has even robbed her on several occasions. Once he broke into her house, stole all of her coffee from the backyard, and sold it so he could keep the money for himself. And now he refuses to leave Almaz’s home, and insists that no matter what she does or where she sends him, even if it is prison, he will always come right back to her. But the part that really rips me apart is that Almaz lets him stay with her and Genet, because she is so scared that if she upsets him, he will hurt Genet. So she brings him into their home, when she well aware of what he could do to both her and her granddaughter, and that he will undoubtedly steal from her. He is here now, so Genet has left her home and is staying with her friend until he leaves again. She is so terrified she won’t even walk in the vicinity of her home, for fear that he might see her. I feel like my world is collapsing. How could things go this far? Why is he even allowed to come back here to his family? How the hell is he being welcomed into their home? My heart is broken.

For Genet, who is my angel and my queen and has so much ahead of her. And for Almaz, who must be so terrified, but is too scared to stand up to her abusive grandson for fear of retribution. Everything about this is unacceptable and simply cannot be allowed to happen, and I refuse to chalk it up to cultural differences. I do realize that I am a total outsider here, and have absolutely no way of understanding what any of them are experiencing. I am a white woman of privilege, coming in and judging how they manage their family. I know this. But I don’t care, and refuse to remind myself for the millionth time about cultural sensitivity. This secret cultural norm of accepting and overlooking abuse has become a brick wall in my attempt to fully embrace my surroundings; there seems to be no way around it, but it cannot be ignored.

To read more about Hannah’s volunteer work, visit her blog, Hannah in Ethiopia.