I have found that the minute I think I’m too old, I am. But I almost never think that … I just don’t think about my life, my dreams, etc. in relationship to my age. And I try not to let the endless list of excuses that we tend to make for ourselves stand in the way of things I really want.

I’m lucky though … I’m surrounded by inspiring people in my life. From my wonderful colleagues at Days of Our Lives, to my amazing mother in law, and even so many of you who’ve shared your stories, I have never been at a loss for inspiration.

Mandy and I were recently talking about this very idea and she shared a couple of stories. We’ve talked about things like this here on PLANK before, but typically as it relates to health, weight and fitness. But the idea of “it’s never too late,” really applies to so many aspects of our life!  So I asked Mandy to share her thoughts here, with the hopes that maybe something strikes a cord and motivates you to take the next step in whatever it is that you’ve been longing to do.

It’s never too late to …

I recently stumbled upon a video of Evelyn Williams, an 82-year-old woman who auditioned for and wowed the judges on Ireland’s Got Talent. It was the kind of click bait Facebook post that leaves you a blubbering mess, smiling ear to ear with mascara running down your face.

Evelyn was great, but she wasn’t the best singer I’ve seen on a show like this. That wasn’t really the point, though. She was an 82-year-old widow with grandchildren who’d been singing her entire life, but who’d never done anything like this before. She sang her heart out and brought everyone in that audience to their feet (not to mention more than a few tears to their eyes).

Evelyn’s sweet story reminded me of a topic I’ve been thinking about for PLANK. And that’s this … it is never too late!

The topic first came to me about a month ago, as I began taking tap dance lessons for the first time in my life. Yes, you read that correctly … I’m a 41-year-old woman who just finished my first tap class EVER.

Now, don’t get me wrong … I don’t have the kind of talent Evelyn has. And I’m certainly not going to be some mid-life Ginger Rogers, but that wasn’t my goal. Tap was something I’d always wanted to try, and as I looked for some fun new ways to move and get fit, I found an adult beginners class at my local community college. So, why not? I signed up and guess what … I had a blast! So much so that I’m already signed up for the next session.

A friend lamenting about a bad relationship she thinks it is too late to get out of.

Another friend once again expressing her long-held desire to go back to school.

And a family member hanging onto senseless anger and resentment because she believes too much time has passed to heal those wounds. 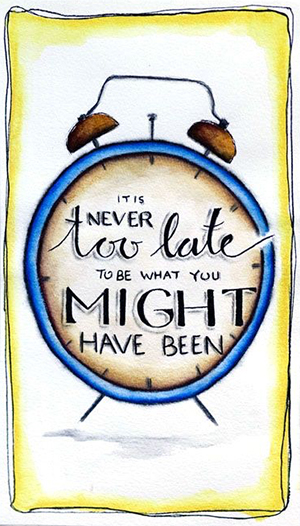 Whether it’s work or weight, love or talent, too many people spend too much time wondering what if. Hanging out on the sidelines, wishing they’d taken the risk, seized an opportunity, bit the bullet or swallowed their pride

And as I think about these situations, or times in my own life when I’ve left something on the table, I have to believe they all have something in common. Fear. Why do we let fear stand in the way of greatness? (or in the case of my tap skills, not so greatness)

I mean I get it why we’re scared. Maybe someone will laugh at me. Tell me no. Break my heart. Maybe I’ll fail. And so what? If those are really the worst things that can happen, I’ll take my chances.

I’m not sure where along the way I adopted this approach, because I wasn’t always this way. But time and time again I found that indeed life begins at the end of your comfort zone.

At 33, I loaded a U-Haul, left my entire family and the only place I’d ever called home to drive 2,500 miles to my new home in Los Angeles. And except for a brief panic when my SUV came off the U-Haul hitch in the middle of nowhere, there was nothing to fear there. And it’s one of the best decisions I’ve ever made.

At 39, I said “what the hell” and signed up to run my first (and only) marathon. Minus the blisters and the body aches, there was only pride at the end of that run. And if anyone was laughing, I couldn’t see them for the joyful tears the filled my eyes.

And at 41, I have just finished starring in my first short film. I’ve been acting since I was a kid, but it was always a hobby … something I did for fun or on the side. Because I was afraid to admit I wanted it to be more. And I was afraid I’d fail. I mean I don’t fit the typical Hollywood bill, and most would have me think that I’m way too old now. And you know what, maybe it never becomes anything more than this. But I did a movie! That’s something that I would have NEVER even dreamed of eight years ago! 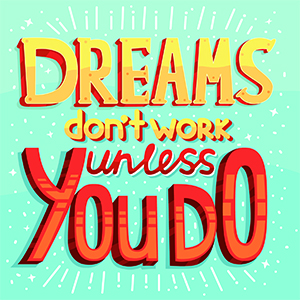 Don’t get me wrong. None of those things came easily. They took hard work, sacrifice and facing fear of failure head on. When it came to moving across the country, I didn’t just pack a bag and throw caution to the wind. I mapped out what I wanted, planned for it, saved for it and worked my bum off for it. When it came to the marathon, I trained and trained and trained some more. And with the movie … well I feel like I’ve been training all my life for that one. And beyond the hard work I put in, there were also sacrifices of time, money and ego.

At the risk of sounding like more than a few of my Pinterest motivational quotes, what would happen if we all stopped letting fear stand in the way. What if we opened our hearts and minds to all the possibilities? And imagine if we matched that possibility with some hustle?

I do understand that the obstacles in some people’s way are far greater than those I faced, and I don’t mean to make light of those. Instead, my point is that you can’t allow time/age and fear stop you in your tracks. Think about what it is you want, and instead of seeing it from the perspective of all the reasons you can’t … start from the place of “I will.” And then knock the obstacles down as they come.

Sometimes it’s hard to do that alone. Sometimes fear has us so blocked that we can’t even see the path to yes. Maybe you need a push … or for someone who isn’t blocked by your fear to help you tackle those objections and obstacles. Or maybe you need someone to hold you accountable and to remind you when the work gets hard. So why not share with a friend? 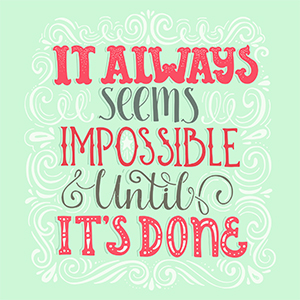 I have a friend who was miserable in her career and had a desire to start her own personal training business. But she was paralyzed by the seemingly insurmountable mountain of obstacles. I suggested that we meet for coffee to talk it through. She talked endlessly about what she wanted to do and why she thought she couldn’t, but at the end of the day her fears boiled down to three main things: the financial risk, the work required to obtain certain licenses and ultimately her fear of  failure. Once we’d cleared away the clutter of noise in her head and could look at the obstacles in three buckets, the whole idea became much more doable. From there we took each obstacle on its own merit and discussed how to overcome it. She literally walked away from the coffee shop with a plan of action … and today’s she’s done it. It was hard (and still is) but she’s done what she’s always dreamed of doing and she’s happier than I’ve ever seen her.

So what is your what if? And what’s standing in your way?

What are you leaving on the table because you think the time to take it has gone? What is it going to take for you to finally move from dreaming about it to taking it?

And if a little third-party push or validation is what you need … share it here! Maybe someone here has the answer you’ve been unable to find. Or maybe we can collectively give you the push you need.

Whether you’ve been wanting to take a knitting class or dreaming of traveling the world … whatever it is, take it from me and Evelyn, it’s never too late!