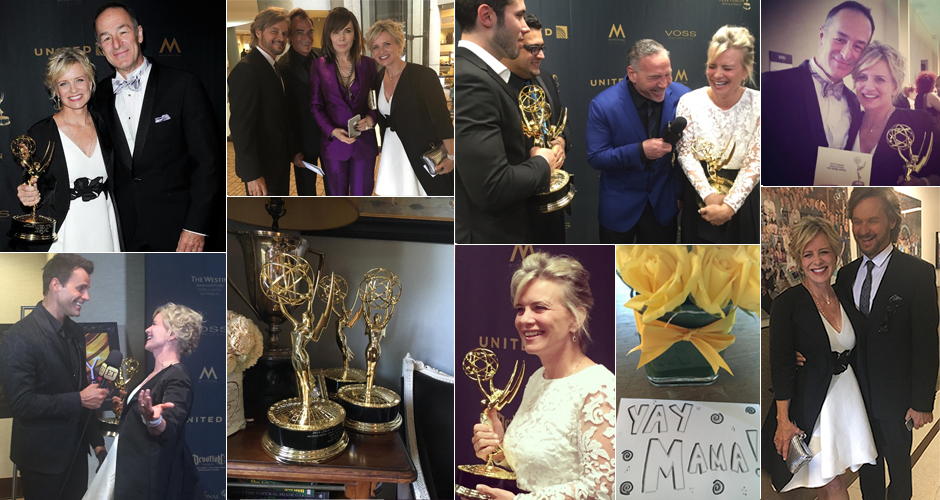 As I laid down in my bed Sunday night, tired from a whirlwind week, a busy month and a tremendous year, my mind raced with excitement and memories. The days leading up to this weekend were long, but really, for me it’s been a 30-year road. A happy, fulfilling road that I never planned or expected, but one for which I am eternally grateful.

Later this month I’ll celebrate 30 years on Days of Our Lives. I remember the audition well, and remember thinking at the time that the three-year contract they were offering seemed like a lifetime. Now, looking back on the years since then, I think this 30-year gift of daytime is the best career I could have asked for.

When the Daytime Emmy pre-nominations came out in January, I was so honored … I had never gotten one of those before. It’s never been about the awards for me – I always thought those were for the heavy-hitters like Erika Slezak and Robin Strasser – but it really is so nice to be recognized for your work. I was appreciative of that and didn’t think much more about it.

Then on the day the actual nominations came out, I remember thinking, “oh, that’s today… I wonder what time that is.” Getting that call from my manager, Michael Bruno, was the greatest – he was screaming and I was screaming and it was wonderful. Then I got a second call about THE BAY nominations … it was just crazy. And really, it could have all ended there and I would have been happy, because I thought those moments and days that followed had to be the best, with everyone calling and all the greats posts on social media.

One of the best parts was my wonderful stylist friend, Cynthia, who called to say congratulations and that she’d sent me something to wear. Cynthia and I have been friends for years and she knows me … knows my style, knows my hangups and knows what looks great on me. The package arrived a few days later and it was perfect! A perfect fit and the perfect style for me, and I literally wore it just as she’d sent it. How lucky am I to have a stylist who understands my body and my style!

The week or so leading up to this weekend was especially busy … it started Wednesday with lunch with the other lead actress nominees. Four fabulous women who I absolutely consider friends and with whom I was so honored to share the nomination. I watched each of their reels and thought they gave such beautiful, rich performances … to me, the playing field seemed fair and I thought it could reasonably go any way.

Wednesday was also the official nominee party hosted by the Academy and that was so much fun … celebrating daytime with all of these people who I’ve known for decades. Then Thursday brought another party (and another outfit … that’s a story all on its own), this time to celebrate THE BAY’s nominations. I’m not really a party girl in that way, but getting to hang out and celebrate with Gregori, Matt, Lilly, Patsy and the rest of THE BAY family was great … plus Gregori announced the addition of Wendy Riche to our team, which is such fantastic news!

Friday night was the Creative Arts ceremony for the Daytime Emmys and I was so excited for THE BAY. After a win last year, we were nominated for five awards this year. You try to go into these things with as little expectation as possible, but I felt good about the show’s chances and was so excited when they called our name. After that was Kristos’ win for Outstanding Actor and I couldn’t have been more excited to see his hard work pay off with that recognition. As the end of the ceremony neared, I stood backstage with Lilly Melgar and Patsy Pease and told them to get ready … I was sure one of their names was going to be called. When they said my name I was stunned … I really hadn’t prepared for that. Everything after that is sort of a blur.

After going to the various press rooms, I was so tired I couldn’t even hang for the after parties … I just wanted to go home and sleep. The next day was busy too, with a fun gifting suite in the afternoon, followed by a dinner party for one of my husband’s colleagues.

On Sunday, I met all of my Days co-stars at the studio and we got our hair and make-up done, then rode over to the ceremony together. This time I got to walk the red carpet with Stephen, which is better … I like having him by my side for those! Finally, we arrived at our table, and with my TV man on one side and my real life love on the other … we were ready to get the party started.

Unlike Friday night, the awards portion of Sunday’s ceremony happened before dinner, so before I knew it, they were introducing the Leading Actor category. It was a category packed with powerhouse actors, but I had watched the reels and hoped it would go to my love, Tyler Christopher. I was so proud of and happy for him as he accepted his much-deserved award, and what a sweet shout out he gave to Stephen.

Next was Lead Actress … and as Chris Hansen introduced the ladies (which I thought was fun because I have watched the Bachelor), I was  happy and content … knowing whoever won truly deserved the honor. Then, as he called my name, it was sort of like time suspended in air.  Now that I’ve seen the clips of the show, I can see Stephen’s heartfelt reaction, as well as my husband’s, but in that moment … I don’t know that I recognized any of those things. Thankfully I managed to keep it together for most of what I wanted to say but  I wanted to end with a special thanks to my husband and my kids for the wonderful, beautiful life they’ve given me … but there was no way I was going to make it through that, so I just had to stop and get off the stage.

Standing backstage afterward, I think I was still a bit in shock, but as I stepped into the room to have my face powdered before the press room, my knees totally started to shake and I think it hit me. Then it was a whirlwind of photos and interviews before they finally let me go back to the table. By then the ceremony portion of the program was over and dinner was being served, and thank goodness, because I was starving!

In one of the press rooms, someone asked me why I thought this was my year. I gave a quick answer then, but since then I’ve thought about it, and I believe this year has been the perfect storm for me.

First, as I’ve gotten older and gained life experiences, I think I’ve gotten more free and open in my work. I used to always think of myself, when compared to those heavy-hitter daytime actresses, as a girl among women, but I think I’ve finally grown up, so to speak.

And in my personal life, I’m in such a great place … I have a happy life, with a wonderful husband and great kids. Couple that with the great things that happened at Days over the past year – celebrating 50 years, getting great writing and them bringing Stephen back into my life – I really do think all those things just came together for me.

Who knows what next year will bring, but this year … it’s been incredible.

PS – I know the shows were posted online, but here’s a quick montage of my whirlwind weekend…