As we continue our look into the subject of body image, I have to back up and tell you that this whole idea came from a simple conversation I had with my friend, Cynthia, who is a stylist. As someone who works to dress men and women each day, she has such an interesting perspective on the topic. I asked her to share a bit of that here with you …

I’ve had the privilege of being in a profession which I love for the past 38 years.  It’s a ‘job’ to which I tap dance every day in anticipation of what I’ll find in the dressing room.  I flatter myself when I think, that in some small way, I’ve contributed to the the self esteem of every client or actor whom I’ve encountered in my career.  I’m a wardrobe stylist and one whose intention is not to ‘dress’ men and women but to instill confidence in them with my choices and direction.

If I had a couch in every studio or dressing room over the years, I’d begin there.  Instead of hearing the initial litany of what’s wrong with their body and what’s being viewed as flawed, I’d lay a client down, listen to the negative momentarily and set it aside.  I can find the ‘right’ in every person’s physical being and rather than being weighed down by their vision of what’s wrong, I re-direct to focus on the positive.  It’s amazing how a light is lit when you’re shown how to accentuate the positive

My first experience with this was trial by fire.  I was a junior editor at Glamour Magazine in the late ’70’s which was my first job out of college.  Indeed, the Devil did exist but didn’t wear Prada…she wore countless bangle bracelets that heralded her approach to your cubicle.  I tell aspiring stylists now that any experience, however negative, is a good one because it’s a lesson learned.  What I took from working with women who did little to elevate an energetic, young woman’s sense of self was that I’d never be that kind of mentor.

After I left Glamour, they called me back to travel with a group of beauty editors who were doing ‘minute make overs’ around the country at different department stores.  Now, I was a 22 year old who didn’t wear a lick of make up so I wasn’t sure how I was going to ‘make over’ anyone assigned to me.  So, with no professional expertise, I faced woman after woman, looking to this young Glamour editor for advice.  It was strictly counseling in a confessional-like setting so I quickly decided that I was going to focus on what I thought was most attractive about the person and how to enhance that feature.  I truly believe that every one who left my company felt better about some aspect of their personage that was beautiful…and there’s beauty in everyone.  I still dislike the term ‘make over’ because there is no such thing.  A person can only enhance what they’ve been given and everyone has this opportunity if encouraged.

The next phase of my career was working in television, doing mostly commercials so the breadth of ages, bodies, types of people and attitudes was vast.  An actor has to have a certain amount of self confidence to simply audition and then to take on a role that is viewed by millions.  I quickly found that outward confidence can be challenged if they weren’t ‘dressed the part’.  Vanity often reared its head when I’d give the chosen wardrobe to an actor and they didn’t feel as if it was flattering in some manner.  I learned to honor this in the most diplomatic way because the wardrobe is the director’s and my vision and our actors had only so much say.  However, once again, if I could re-direct their thinking to what was right about their costume and how it was perfect for the role and camera, all was well.  The power of positive thinking, a stylist with the right vision and knowing her lines made for success every time!

I’d always worked with television anchors which parlayed into an eight year assignment as Katie Couric’s stylist.  She was tapped as the first woman to anchor a prime time news broadcast and needless to say, was filling bigger shoes than her tiny size 6.5 stilettos.  Katie has all the spirit, confidence and intelligence with which we’re all familiar.  And all that goes into her impeccable preparation for every conversation which doesn’t allow for any time to find the perfect wardrobe.

Enter yours truly and it was again, a role for which I had limited experience.  I knew, however, that her new position called for bringing all eyes to her face so that the public could focus on the message.  Gone were the days of ‘perky’ and ‘great legs’ that were constantly touted on the Today Show.  We needed the viewers to think of Katie with her earned gravitas.  She’s a curvy girl with a fabulous figure that was now being shot from the waist up.

I learned quickly that Ms. Couric’s playful, understated sexy side was not to be diminished even though I was buying newly tailored jackets that were a big departure from the frippery on Today.  Now my quest was to make Katie feel like Katie under all that tailoring and so I did.  Every dress, blouse, skirt had some semblance of sexy that was betrayed from the waist up when she sat at the anchor desk.  Katie felt like Katie underneath thanks to judicious styling that allowed her to ‘take it off’ at 7pm and go from desk to dinner looking like a million.  Needless to say, we had much more fun on the KATIE Show where I could dress her in everything fun and current … we both loved it.

After we ended the show, I decided to put my talents toward ‘everyday Cinderellas’.  I joined the ranks of the Fifth Avenue Club at Saks Fifth Avenue in Boston.  I had been a client in the Club for a long time, often working with one of the stylists from whom I’d request a ‘pull’ for Katie’s wardrobe or a private client.  The Club is the best kept secret in Boston and often, other cities who have a Saks store.  Anyone, regardless of what they want to spend, has access to a stylist in the Club, by appointment, for advice as well as shopping within the store.  I looked upon this opportunity as one that neatly combined all of my past experience which I could now lavish upon anyone who crossed into my studio…and I do.

I have both men and women as my clients, however, the lion’s share is women.  Every woman walks in with their particular quest, and as we embark, starts our session by telling me what’s ‘wrong’ with their figure.  My clients range from 16 to 101 (my favorite) and never has anyone failed to tell me a negative.  I always find it amazing and again, an opportunity to find the perfect piece that will instill some newfound confidence.  Just like the ‘minute makeover’, in this situation, I can’t help a woman lose 20 pounds or sculpt arms that will rock a sleeveless dress.  I instead look for their best feature; a small waist, great legs, slim hips … whatever it is … and run with it.  I can honestly say that those who have decided early on (after pregnancies, menopause, etc) to make a conscious effort to remain fit and healthy are happier for it.  I can’t change habits in these appointments but I can change attitudes. 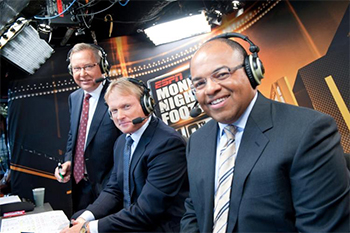 It is remarkable how men and women view themselves so differently.  I love working with men.  I’ve been the stylist for ESPN’s Monday Night Football for 10 years and it’s been a joy.  Men are easy.  Not only do I love men’s clothing, there’s less choice so it’s not complicated.  I have to laugh, though, because 9 out of 10 guys walk out of the dressing room and preen …some of them actually saying ‘I look great!’… and they do … and I laud them for it.  I don’t know what the genetic code is for men to have such a positive sense of self, but they do.

My daily quest is to bring that same spirit into every woman’s Cinderella moment;  when they’re standing in my presence, half-naked and don that perfectly chosen dress … and say ‘I look beautiful!’.  I’m doing it, one by one and encourage all woman to start to think differently about daily dressing.  Of course, look at your self critically but try to be less critical and focus on your best feature.

And remember … every day’s a chance to have a ball!