So here I am in my 50s, and I’ve never gotten over my fear of public speaking. Couple that with the fact that, despite my career choice, I’ve never been a spotlight seeker and you’ll begin to see why the thought of this past week has been a source of terror for me for the last few months.

As some of you probably know, I was honored by CASA of Los Angeles this week at their annual gala. It was a fantastic event – thanks to many of you for your support of me and your contributions to this incredible organization – but the road to the gala was not an easy one for me, and I thought I’d share a little of the journey with you.

About six months ago, I was invited to lunch by one of the CASA board members. The invitation was a surprise, but an even bigger surprise came when he told me they’d selected me to receive their Robert Morrison Community Service Award, which would be presented at a gala in May.

I, like many of you who do anything as a volunteer, just do the job the best I can and then go about my life. As honored as I was to be selected, I felt completely unworthy of being singled out in this way. Yes, I am an actress, and you’d think I would like to bask in this type of attention, but that’s just not me. In fact, for some reason, having the attention pointed at me embarrasses me. 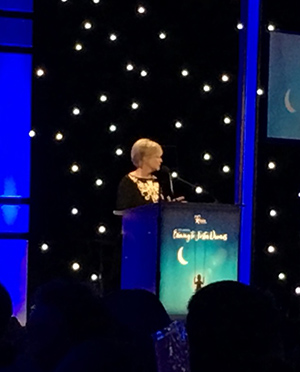 Plus, I am terrified of public speaking and I knew this award would require some kind of speech. Again, I realize this is a crazy contradiction to what people commonly think actresses are all about, but for me acting was never about the spotlight, but rather about being able to work in the field I love (not to mention that, besides being a waitress, I have no other job experience … although I always bag my own groceries, just in case).

Obviously I feel passionately about CASA, but I knew receiving an award at an event like this would warrant some kind of acceptance speech. That completely freaked me out! A speech before 800 people? Holy moly, yikes! I can say lines as a character all day, but public speaking is one of my biggest fears. Maybe I’ll misread my speech or stumble over my words. My goodness, what if I faint? And write a speech?!?

That evening, my husband, who is always the voice of reason, reminded me that while this is a nice honor, it really is something that is bigger than me. And that I should use the opportunity to spread the word about CASA and all the great work it does for the children in foster care. The sense of panic didn’t leave me, but the next day I called to say I would be delighted and honored to except the award and speak at the gala.

Ugh, now what? For the next six months, whenever Mandy (who so graciously agreed to help organize my part for the gala) would bring it up, I’d say “Oh geez don’t talk about it … it makes me so nervous.” I was nervous when they announced it, nervous to send out invites to my friends and felt panic anytime the subject of writing the speech came up.

As the event got closer and friends would tell me they were coming, my heart would start pounding at the thought. I just tried to push it out of my mind. Finally, with a few weeks to go, I took the big step and invited my children (who I rarely take to events because the attention on me is embarrassing … like I always say they think I work at a bank).

The day of the event came, and man was I nervous! But I kept telling myself I needed to be MATURE about this and reminding myself that it wasn’t about me! Well, the craziest thing happened – my knees did not buckle, I did not slur my words, and the message was really good and well received.

As I took my seat after my speech, I was so happy. Happy to be able to enjoy the rest of the evening, but mostly happy that my husband and two of my children where there to enjoy it with me. They were SO proud of me and I realized how great that was … that it was cool for them to be proud of me. I set an example for them, not only in community service, but also in tackling one’s fears! When we got home they said it again, and the next day they sent me notes of how proud they were. For me, that was the biggest award!

So here’s to tackling new things and concurring our fears … and to finding out along the way that, low and behold, not only will you survive, but also you’ll grow as a human being. Let’s all vow to not let fear stop us … and to keep challenging ourselves. Because take it from me, it sure does feel great!

Here’s a little video from the evening …