Thank you all for the thoughtful comments you’ve shared here so far – I love reading your reactions and learning about how much we all have in common. I can relate to so many of the experiences you’ve shared, and one in particular strikes me today – the times in our life when we’re bored, idle or feeling a complete lack of motivation.

As I mentioned in my very first post, I am a product of a single mother who worked hard, but struggled financially. I have always been a worker bee, so I got a job when I was 14 (back when you could) so I could afford to buy the “extras.” I started working hard, or hustling as I like to think, to achieve goals I had laid out for myself; and I’ve never really stopped.

When I was offered the role of Kayla Brady on Days of Our Lives in 1986, I didn’t have any idea what a good fit a continuing drama would be for me. Now, here I am – three nearly consecutive soaps and 29 years later (yikes) – with this year looking to possibly be the best ever!

Now let me back up a bit here and say that while I have been busy for most of those 29 years, I have also had months, and sometimes years, of “being out in the cold,” as I often say. And in those times I felt CRAZY! If my husband would ask me “what are you doing today?” I would feel bummed out because I had no idea. “Surely nothing that great or important,” I would think. Down time has always made me feel anxious. Obviously when my kids were young it wasn’t such a problem because I could focus on them and their needs, but those days are gone now (my youngest, Matthew, is graduating from college in May … yay!)

So in this empty nest world, and especially during these past few years when I’ve not been working as much as I am used to or would like to, I’ve had to get moving! I’m not kidding – when I start feeling sad about the lack of purpose, I start setting goals for myself. Like Mandy so beautifully wrote in the last blog about an exercise goal that really got her motivated, and the incredible feeling of accomplishment in making it to the finish line.

Some of you have commented that I do so many things – but you should know that it’s all this that pushes me. I start making plans and sometimes I almost overbook myself so that I’m forced to get MOVING! I may even start with lunch dates with people I need to catch up with but have procrastinated. Anything that gets me out the door! 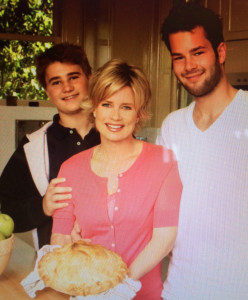 With my boys when I first started Mary Beth’s Apple Pie Co.

And it’s times just like those that have led me down some unexpected and exciting trails. Take Mary Beth’s Apple Pie Co. That sure kept me busy, mostly because I didn’t know one gosh darn thing about any of it! But as my husband kept telling me “just say yes and figure it out later.” I took a giant leap of faith and great things happened. Just a short time into that venture, I went on QVC and sold 3,000 pies in seven minutes. Following that, I went on The Today Show to talk about the company and became a top Thanksgiving seller at William Sonoma. All absolutely unexpected! 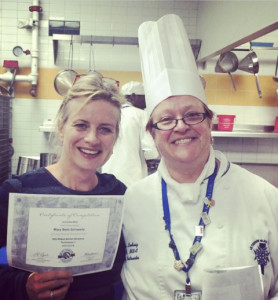 A certificate from Le Cordon Bleu

During other lulls in my life I have signed up for many “how to” classes – from cooking and baking to knitting or tomato planting. You name it and I’ve probably taken a class in it. I’ve also painted entire rooms in my house myself (much to my husband’s mind doogle); I’ve become a CASA advocating for foster youth; I’ve taken sailing lessons (click for video); and most recently I’m finishing a new organic vegetable garden (that I will blog about later). All of this to keep the creative juices flowing. And I must say, whenever I do this, more work follows!

A good example of this is five years ago – I wasn’t working on Days of Our Lives, didn’t have anything going acting wise and was really starting to feel the anxiety and craziness creep in. I knew I needed to make things happen for myself, and then I was approached about doing a web series. I didn’t really know much about it, but I said “sure.” In the time since then I’ve said yes to all kinds of new acting opportunities – from acting in plays (click for video) and taking on roles in independent films, to a re-occuring role on ABC Family’s Chasing Life, and most recently trying my hand at comedy in a new Saturday morning series pilot. Today, all of that has paid off in more ways than I could have imagined. All because I took risks, got out of my comfort zone and said yes to new opportunities.

A poster from a play I did, a script from a table read and my new role in a comedy series pilot.

What it all boils down to for me is that I feel better about myself and am more productive when I’m proactive; and as a result my life has improved and changed for the better in more ways than I can count. The hardest thing is getting started, but I am challenging you to start … and you can do that by seeking out and saying yes to opportunity!

As you do, I hope you’ll come back here and share your journeys with me, because you all inspire me too!