This past weekend was the Daytime Emmys … always a fun time, but even more so now that it’s become a whole weekend affair. Now that I’ve had a few days to unwind from all the excitement, I thought I’d recap a few of the highlights.

Of course deciding what to wear is always a task, but I did it with the help of my stylist friend, Cynthia, and Sarah & Richard from the Days of Our Lives costume department, which made the whole process collaborative and fun. Cynthia and I looked for dresses for a while and finally landed on two cute, short and colorful dresses. One had short sleeves (and you all know my issues with my arms), but I decided to let it go and just rock it … and I’m so glad I did. Each paired with some fun shoes and given a little poof with a crinoline petticoat, which the Days costuming team helped me make, I felt great and was ready to go!

Friday night was the Creative Arts ceremony, which was especially fun because the Bay was nominated for 10 Emmys, and Days was up for quite a few too! The ceremony was long, but these events are always a fun time to catch up with cast and crew outside of the studio. When the final categories were called, we were overwhelmed with a record-breaking five wins for the Bay! And I was so touched that my Days cast and crew stayed until the very end to support me … it made the whole night sweeter to have them there, cheering me on and standing up as my was called!

Following the show, the entire Bay crew headed over to a fun little after party … a celebratory toast and yet another chance to celebrate with all the people that made it happen!

After a little rest on Saturday, we were back at it on Sunday! Unlike Friday night, where I did my own hair and make up, Sunday night I had some help! One of my favorite Emmy traditions is that the entire Days cast meets at the studio on Sunday morning, where we all get dressed together. Such a fun time!!

This year, because the ceremony was being held so close to my house, I met everyone at the studio for hair and make-up, but went back home to get dressed. Later, Stephen met me there and we took a car over to the show together. 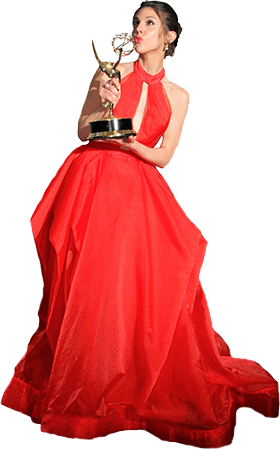 As the show got started, I was so excited to be seated near Kate and her boyfriend! I think of her like my daughter/dear friend and I’ve been rooting for her for two years. Last year, I told her she’d win … and was so disappointed when she didn’t get the nomination. This year, I just knew it was her year. And I’m beyond excited that she was finally recognized for her brilliant work!!

This year’s show was great too, with a fun opening number featuring cast members from several shows (including our Eric Martsolf & Nadia Bjorlin), Susan Lucci giving a moving tribute to Agnes Nixon and a stage full of dogs (some bit featuring about 50 bassett hounds).

After the show, the entire Days cast headed over to a restaurant for a great after party. Celebrating Kate and the others who were nominated, having Kassie DePaiva there with us and getting the most amazing speech from our Bruce Evans … it was the best way to toast to another great year and I loved being a part of it!

Thank you all for your support … your kind responses to my posts from the weekend and your ongoing support of me and my work on both shows. I went 30 years without so much as a nomination … and to have six Emmys now sitting on the table beside me … it all still seems so unreal!

Here’s a little video of all of the fun!